‘Part of German soul’ under threat as forests die

‘Part of German soul’ under threat as forests die

Action plan to be drawn up as dry summers, storms and pests destroy swathes of woodland

A catastrophic combination of heat, drought, storms, forest fires, beetle plagues and a fungi blight have so far this year destroyed swathes of German forest equivalent to more than 200,000 football fields.

Forests are one of the most efficient ways to reduce carbon dioxide emissions, and in Germany alone they are able to absorb 62 million tonnes of CO2 – about 7% of the country’s emissions – every year.

But forests have also been at the heart of Germany’s cultural identity for centuries, and politicians are now seizing the issue – known as waldsterben (dying forest) – as a top priority.

The agriculture minister, Julia Klöckner, has announced a forest summit next month, at which national forestry and climate experts are to agree on a multimillion-euro action plan. Klöckner has pledged €500m (£460m), to be paid out of the government’s energy and climate fund, to finance it.

“Our forests are massively damaged,” Klöckner said, visiting Moritzburg near Dresden, which has been badly hit, many of its trees brown and dying, mainly due to drought and beetle infestations.

“Only if everyone unites will we manage the mammoth task that lies ahead of us – to save our forests not only for ourselves but for future generations,” she said.

The society for the protection of the German forest, SDW, believes the extent of the destruction goes even beyond the government’s estimate. It has said the trees being lost at the most rapid rate are those that make up the bulk of the forests, including spruces and firs, pines, beeches and oaks.

In last year’s dry summer and this year’s, the forests have been hit by a shortfall of 200 litres of rainwater per square metre, according to SDW, which Germany’s meteorological service says is the driest it has been for 50 years. 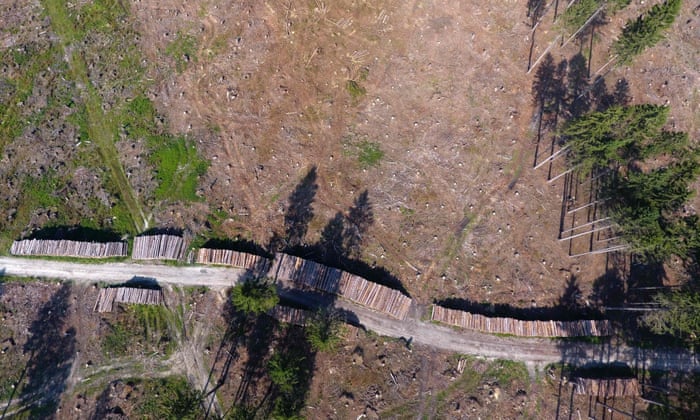 The association of German foresters (BDF) has said German forests are close to collapse. “The forest is the best way to save the climate, but right now the forest itself is a victim of the climate catastrophe,” it said.

A third of Germany is made up of forest, or 11.4m hectares (28 macres) – about a half of which is private property.

The crisis is being keenly felt, not least after a recent survey on national identity in which 50% of participants cited forests as being central to their idea of heimat or sense of home.

Germans have for centuries had a mythological, even spiritual, identification with their forests. Woodlands have formed the inspiration for much German music and literature –most famously the 19th-century folk tales of the Brothers Grimm. In everything from Red Riding Hood to Hansel and Gretel the forest is portrayed as a place of foreboding and threat and as well as retreat, safety and learning.

For German romanticists in the late 18th century, the forest was an important symbol of unity and purity, the word waldeinsamkeit, forest loneliness, embodying the sense of inner peace to be found in the forest. This was later exploited by the Nazis, who encouraged the idea of the forest as a sign of German cultural solidity, encouraging people to plant German oaks to honour Adolf Hitler.

The tabloid Bild recently published an ode to the German forest, calling it “part of the German soul”.

“It is, alas, not some made-up fairytale … that our forest is in a state of emergency … and if we don’t do something to save it and ourselves, we might end up with the story: ‘Once upon a time, there was a place called the German forest,’” the paper stated. 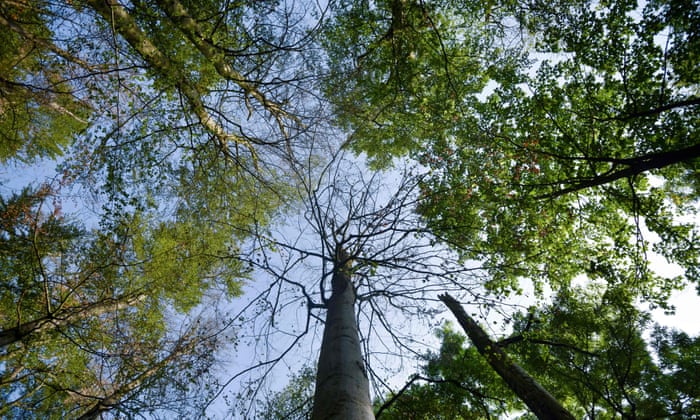 Experts are divided over the best plan of action. Solutions range from introducing more robust tree species to naturally allowing forests to adapt to the conditions. The opposition Greens are calling for a return to primeval forests – woods left to their own devices, after researchers at Zurich’s Technical University calculated that there was room on the planet for a third more forests than at present without encroaching on urban or agricultural spaces.

While owners of private forests are tending towards planting Douglas firs and northern red oaks, the Association for Environmental and Nature Protection in Germany, a leading NGO, says non-native species are an ecological risk.

The trees that are most under threat are said to be spruce, beech, ash, Norway maple and sycamore. Those most able to weather the climate crisis are robinia, plane, and sweet and horse chestnut trees.

Among those likely to be increasingly imported in future are Turkish hazel, Italian acorn, silver lime, and Lebanon cedar. The challenge is to find varieties able to cope with hot summers as well as harsh winters.

Klöckner believes that as many varieties as possible are necessary, referring to experts who say nature cannot be left to cope on its own. “We need mixed forests and trees that are adapted to their habitat,” she said.

Tanja Sanders, an expert in forest ecology who researches what the forest of the future might look like, said: “Forests are a vital part of our lives. They form groundwater, give us wood, filter the air, reduce CO2 and the temperature and offer space for species conservation and human relaxation. But we must face up to having to say goodbye to the forest as we’ve known it.”