Why the world needs an IMF for the climate crisis

Why the world needs an IMF for the climate crisis

Just like after 1945, a new dawn of international bodies is required – this time to protect and empower the global south

Human civilisation is facing a crisis on a scale that we have not seen since the second world war. We must finally respond in a way that meets this immense challenge.

The climate crisis is of our own creation, particularly that of the richest countries whose development has been based on exploiting natural resources without end. The casualties are piling up – some countries and entire communities, in particular island nations, are the most exposed and least prepared: after Hurricane Dorian, we have all seen the devastation in the Bahamas.

In the aftermath of the second world war, countries came together and created institutions that aimed to pursue justice and peace. The World Bank, the International Monetary Fund and the United Nations aimed to create a new world of multilateral cooperation. In the early days, newly decolonised countries attempted to shape these institutions to support their agendas but at every step these efforts were curtailed. By ceding to the power of certain dominant nations and multinational corporations, the World Bank, the IMF and the UN have ultimately exacerbated the climate crisis.

As our climate emergency unfolds with the economic and ecological instability that it wreaks, we need to again consider a host of new pan-national institutions to tackle this threat. The effects of the climate crisis will be most extreme for people in the global south. It requires massive investments, as much as an additional $2.5tr per year, according to the United Nations Conference on Trade and Development, which current financing and institutional arrangements appear unable to fulfil.

We would need to ensure financial stability and a mechanism for the transfer of resources through an international climate stabilisation fund – a sort of IMF targeting the climate crisis. This agency would put in place new fiscal arrangements to regulate global financial markets and corporate elites, especially those that have made vulnerable island and developing countries into tax havens or exploited natural resources. These nations now require the means to transform their futures. This body could seek to coordinate tax policies and disburse lost taxes to provide direct support to climate-exposed territories: encouraging productive diversification and tackling interconnecting inequality and displacement caused by climate change. 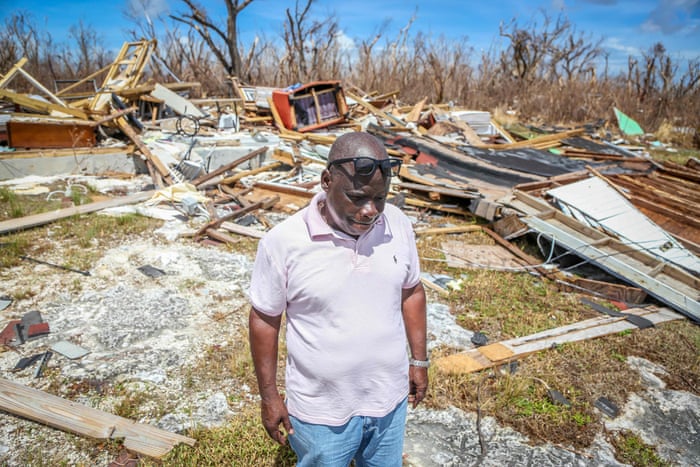 Bursel Pinder stands among the rubble of his destroyed home in High Rock, Bahamas, in September 2019. Photograph: Zak Bennett/AFP/Getty Images

Second, there is a need for a permanent international mechanism that delivers immediate funds, supplies, support and relief after major climatic and natural events. This agency would be the “supplier of first resort” and its decision-makers would come from the global south alone with a wider supportive framework. It could focus on reparations and wealth redistribution from the wealthiest nations in the global north to the south, reflecting who is responsible for the crisis and who is most affected by climate-induced environmental disasters.

While progressives in the US and the UK have shown some courage by proposing genuine policies to tackle the climate emergency, these movements have remained insular because they have largely neglected the developing world. At Labour’s recent party conference, shadow chancellor John McDonnell proposed a form of reparations for the UK’s colonial past by giving “citizens of the global south free or cheap access to the green technologies developed as part of our green industrial revolution” – but this idea is somewhat reductive and the challenge is more complex. Developing countries certainly do need access to technologies that would not further put them in debt.

However, it is essential to change the global rules of the game which are currently tilted in favour of multinational corporations and continue to prioritise ideas originating in the developed north. It is also about correcting illicit financial flows, abolishing intrusive free-trade agreements and reversing ongoing environmental harm – this requires coordination at a global level to expand the powers of impoverished and ex-colonial nations to determine their own futures and move towards reparatory justice.

Indigenous groups, community activists and environmental movements across the developing world have long known and advocated what is finally being accepted around the rest of the world – but they are still ignored by the countries most responsible for the climate emergency. Major interlocutors of the Green New Deal, for instance, make very little mention of these groups in the developing world at the frontline of ecological breakdown. Movements in the global north and south need to share resources, identify and incubate bold new ideas, and coordinate action under mutual respect and equality.

Radical initiatives like an International Green New Deal or an organisation for emergency environmental cooperation will not work through existing international institutions to ensure a productive global economy, a just society, a caring community, participatory politics and a sustainable future.

Over the past year we have seen a growing movement of people taking to the streets around the world to demand action from our governments on the climate crisis. But to have any serious effect, we must transform our global institutions – or create new ones – to meet the demands of climate breakdown.

To do so we must recognise that the climate crisis is having a disproportionate, violent effect on the global south – and that the starting points in efforts to address what’s happening to our world will not be the same. We must build an intersectional and ethical global climate justice movement that brings together diverse peoples from different locations to deliver a green new world.